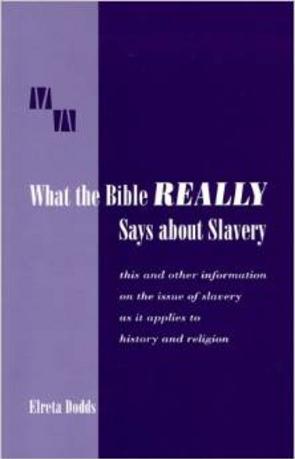 Chapter One
What do Christians Believe? ….p. 1

Chapter Two
Why do Christians Believe what they Believe?….p. 23

"What the Bible Really says about Slavery" is out of print but can still be ordered online at Amazon.com and at other online stores.

If you've ever wondered what the Bible says about slavery, whether or not the Bible condones slavery or not, then this book was written just for you. Several proponents of slavery during the antebellum years misused the Bible to justify the brutal enslavement of blacks. Consequently, many blacks have shunned the Bible over the years and have refused to read it. Since the Bible was often misused to justify the brutality of slavery, a comprehensive investigation of what the Bible really says about slavery is necessary.

This book serves that purpose. A near exhaustive scriptural account of the matter is given. No scripture that firmly addresses the issue is withheld from discussion. Part One of the book sets a foundation by addressing what Christians believe and why and also examines the history of slavery in America and abroad as well as the history of the involvement of Islamic nations in the past and present enslavement of Africans. Part Two provides a comprehensive look into what the Bible says about slavery by giving a complete scriptural analysis. Part Two also addresses the myth of the "black curse" and provides a brief history as to how the events of the Civil War helped to abolish slavery. The Epilogue follows.

Publication Date: January 2000 (Revised edition of a first edition book entitled "Slaves obey your Masters" originally published by Winston/Derek Publishers in 1996). All rights were returned to the author.

​Press Toward The Mark Publications